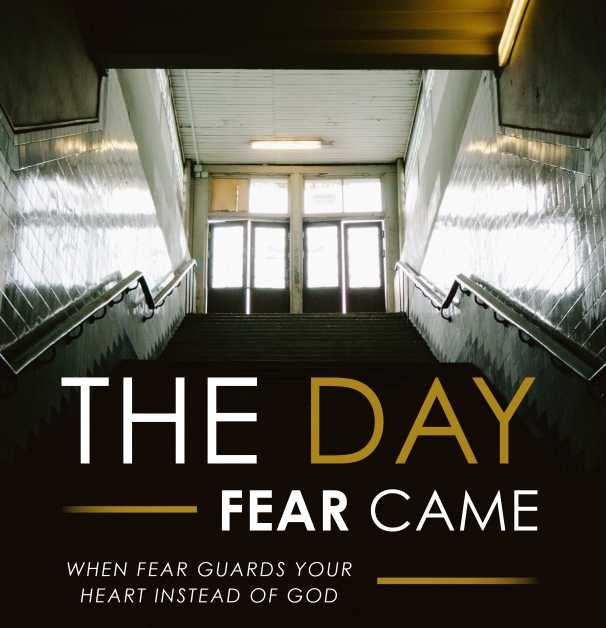 God is an expert wall-destroyer, isn’t He?

I’m not just talking about Jericho or Jerusalem or when King Uzziah broke through the Philistines’ walls (Joshua 6:20, Isaiah 22:5, 2 Chronicles 26:6); I’m talking about the walls we build around our hearts.

Few cities are walled nowadays, but at times our hearts—the epicenter of our person—can be more fortified than Jericho ever was. God loves to break down those walls.

Over the last year God has kicked down a few heart-protecting bricks in my life, and in the process, revealed layers of fear and insecurities I didn’t know existed as they were pushed safely behind carefully constructed defensive barricades.

This unveiling has led to a lot of prayer, a lot of Scripture-searching, and a lot of questions. Why do I put up walls? Why these fears? Why fear at all? What is the root of this?

To answer those questions, we have to go back.

What was the first mention of fear in the Bible?

Put yourself in the glorious Garden of Eden. Imagine animals roaming freely and peacefully as a mist goes up from the earth watering the green land and blooming flowers. Hear a chorus of chirping birds and listen to the laps of the river brush the earthy bank. Watch the fish dance in the glistening water and see trees full of stunning blossoms and rich leaves. Smell the sweet fragrances of fruit and flowers, absorb the vibrant colors, and be dazzled by the sky aglow with handcrafted sunsets and shimmering constellations.

But with a whisper, the scene changes. Dissonance builds in the background. Fruit from the forbidden tree is rebelliously ingested and, as promised, the eyes of the first man and woman are opened. Their bones quake with foreign feelings of shame, humiliation, and overpowering panic. We disobeyed the God who made us. We’re going to die.

And just like that, fear was in the world for the first time.

What did this fear compel Adam and Eve to do?

And don’t we still?

We hide in our fig leaves of false security, our caves of over-scrutinized caution, and our self-made dams of disbelief, terrified someone might see us for who we really are: dirty, insecure, weak, needy.

Fears flare in our souls like fireworks across a dark sky and rattle us to the core, against all rationale. But in light of our first parents’ history, it should be no surprise that our default setting is fear.

I am constantly at war with tiny fear soldiers dressed in army fatigues of terror while they shoot bullets of rejection, pain, and loss, among other things.

Fear bullets can do some serious damage to soft hearts, so we build walls of protection to shield ourselves from the brutal impact sure to come.

Like Adam and Eve, we hide. We bury pain and protect ourselves from feeling it ever again. We cover up the blemishes. Gloss over the less-than-desirable parts. Avoid the shame-inducing. Guard our hearts.

The problem is that God has told us He is our shield, our defense, and our fortress of protection (Psalm 18:2). He is the One who guards our hearts (Philippians 4:6-7), which makes sense, since He bought them with His blood (1 Corinthians 6:19-20).

WHAT FEAR TELLS US

At the core, beyond the rising blood pressure, increased heart rate, and heightened awareness, fear tells us we need a Savior. Whether it’s a fear of failure, rejection, death, or the dark, fear sends a signal to our souls that we cannot be all there is to this life. Fear whispers of our brokenness and cries for security, for refuge, for something (Someone) bigger than us to protect us.

Fear prompts us to run. To hide from God, from vulnerability, from confession, and from other people, but for those who are in Christ, we are just that—in Christ. We don’t have to hide because we’ve been hidden in the wounds of the suffering Savior.

My favorite part of Genesis 3 is verse 21. God has just issued the curses on the serpent, the man, and the woman, but He’s not finished with them.

And the Lord God made for Adam and for his wife garments of skins and clothed them.

Take in the magnitude of this action. Where did the skins come from? In order to cover the nakedness of the rebels, one of the animals—some say it was a lamb—had to die.

The first sacrifice was made, garments of grace given. Hints of the ultimate sacrifice to come played in the shadows.

Those shadows were illuminated as the Light of the world took on flesh and dwelt among us, waging war on the kingdom of darkness. Through Jesus’ life, death, and resurrection, restoration to life as it was before sin and fear slithered in is granted to all who come in faith.

And it is there, at the bloody but beautiful cross, we find the antidote to our sin and the perfect love that stops us in our tracks as we run to hide in fear. This Perfect Love swallowed the wrath of God on our behalf and now sits at the right hand of the Father offering reconciliation, freedom, joy, and peace to any who approach.

Not only that, this excessively merciful Creator gives us a new wardrobe. Just as He graciously made Adam and Eve garments of animal skin, God clothes all who repent and believe in the garment of the Ultimate Sacrifice, our propitiation.

For the rest of the article and more free resources, check out the January/February RTM Magazine here.

5 comments on “When Fear Guards Your Heart Instead of God”