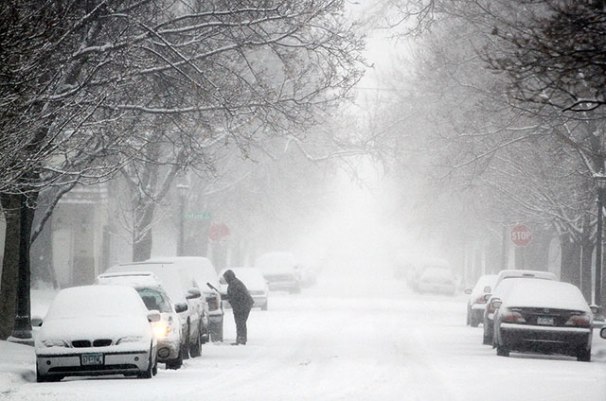 It snowed in Paducah last night. And by snow I do not mean anything resembling the above photo. We got about five flakes, so schools were running on a two-hour delayed schedule to accomodate the Kentucky drivers who don’t know how to handle these harsh snow storms.

First, I should mention that I’m one of those drivers. I am terrified to drive when there is even the smallest possibility that there could be ice.

Because schools were running on the delayed schedule, on my way to work this morning I passed a lot of teenagers standing at the end of their driveways or streets waiting for the bus.

But I also saw two others instances that warmed my heart despite the freezing temps.

It was a house I’ve often passed. It was small with a moderate yard and cream-colored siding. I glanced at the old truck sitting at the end of the driveway and saw a precious little old man in the driver’s seat with a young boy, who I’m assuming is his 11 or 12 year old grandson, in the passenger seat. The truck was running and they looked as if they were having a sweet conversation.

As I continued driving, it dawned on me that they were sitting at the end of the driveway to wait for the school bus. I almost teared up realizing that this grandfather would heat up his little old truck and drive to the end of the driveway to wait with his grandson. Upon that realization I had one thought (directed into this kind of never-ceasing conversation with the Lord):

“God, I wonder if that little boy knows how much he is loved?”

I passed another truck at the end of a driveway further up the road with what appeared to be a dad and daughter. Again they were waiting for the bus in the comfort and heat of the vehicle.

“Wow, God. Do these kids know how much they are loved and that it is love that caused those men to start up their trucks and use their gas to keep them warm? Show them the 10,000 ways they are loved but are too self-absorbed to see.”

Then it was as if the Lord gently nudged my heart.

“Do you know how much I love you? What about the 10,000 ways I show My love to you but you’re too self-absorbed to notice?”

Lord, open my eyes to see the works and love of Your grace directed toward me.

“While we lament the apparent injustice of pain and suffering, how often do we forget that every good thing in a fallen world is wholly a gift of God’s mercy and grace? We think to question God when bridges fall but not to wonder at His grace that every bridge does not. Every fit of laughter, every delectable morsel of food, and every single smile is the result of His mercy and grace; He owes us none of it.” -Matt Chandler, The Explicit Gospel

2 comments on “Warming the Car Up”