My dad is one of the greatest people I know. His heart for the Lord and the intensity of his pursuit of Him as the supreme treasure is an example I don’t take lightly. He and my mom raised my sister and I to love God and others, laying ourselves down for the betterment of the group, to do what’s right—come what may, to make wise choices, choose friends carefully and to always, always remember where strength comes from.

Today I watched my dad serve others. This is not a new thing, he does it as often as he breathes, but I saw something different today as my dad distributed freshly smoked ribs and chicken to neighbors on either side of us.
As he called the neighbors to ask if he could bring them something, their responses struck my heart. “Well, Stan, that’s right neighborly of you!” (And with that I was transported to a different era, where neighbors cared for each other and said things like “that’s right neighborly.”) 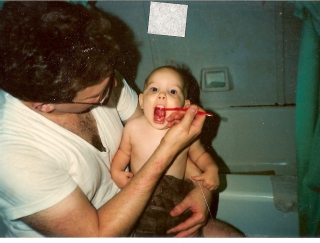 He is cautious and careful in decisions; always striving to be a wise steward of all God has given him, including money, time and family. He is a strong leader, a man’s man who knows how to work and plan to get things done in an efficient, productive manner. He has the gift of mercy and extends grace as he’s been given from the Lord, but he doesn’t mess around when it comes to sketchy behavior or having hard, but benefiting, conversations.
My dad loves me. He tells me that 8,293,471 times a day and I’m learning what a gift that is.
But here’s the thing I remembered as I admired my dad’s intentionality in serving our neighbors. I have another dad. One who is even better than the first, though at times I can scarcely take that in.

My other dad loves and serves others even more than the first. He goes to great lengths to prove His love, including sending His only Son to a cross formed from a tree He made, setting the stage for a grand story of redemption and reconciliation that brings even the hardest sinners into His family if they accept His pardon offered.
That’s where I came in. He adopted me. Now I have two dads—an earthly dad and a heavenly one. Though they can hardly be compared to each other because of God’s holiness, Jesus Himself makes the connection.

“What father among you, if his son asks for a fish, will instead of a fish give him a serpent; or if he asks for an egg, will give him a scorpion? If you then, who are evil, know how to give good gifts to your children, how much more will the heavenly Father give the Holy Spirit to those who ask Him!” (Luke 11:11-13 ESV)

What a great Father. Believe Him for big things for He is bigger than our comprehension and delights in blessing His kids, just like an earthly dad. 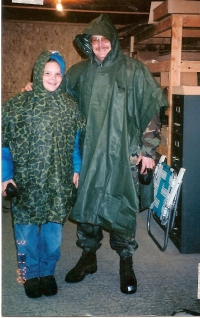 I realize some people don’t have the greatest relationship with their earthly dads and some even carry scars so deep because of their past encounters with or the absence of their father, but I encourage you to not carry that same view of your earthly dad to your heavenly Father.
He promises to never leave you or forsake you, to lead, guide and protect you and to be your refuge, strength, comfort and salvation if you trust Him.
For those of us with amazing earthly dads, remember that as great as they are the Lord is so much more. Cast your affections on Him and He will pour Himself into you. Give Him your heart, you can trust Him with it.